Amarnath Yatra 2012: Where every step takes you closer to your faith 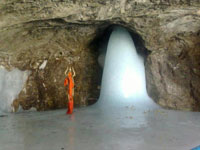 "Amarnath Yatra takes you on a journey of faith , a pilgrimage that has evolved over time by Hindu sages and embodies the spirit of wonder, adventure and spirituality".

Every year thousands of devotee pay obeisance to the auspicious Shivaling or Shivalingam at Amarnath. Like every year, this year too Amarnath Yatra 2012, will be for nine days. The starting date of Amarnath Yatra 2012 is 25th June 2012 and it ends on 2nd August 2012. The number of devotees is increasing year after year and seeing the increased number of deaths during the pilgrimage, norms laid by government getting stringent. However as they say, when devotion is sincere there is nothing that can stop you and so before you get late, register for Amarnath Yatra 2012, and be a part of this sacred journey to remember.

Belief has it that those who get an opportunity to see the famous Ice Lingam - Jyotirlinga of Lord Shiva, get abode in Heaven. Chanting 'bam bam bhole', thousands of Hindu devotees will be travelling across the beautiful valley of Pahalgam to reach the Amarnath Cave, amid the snowy eastern Himalaya mountains, to see the sacred shrine of Lord Shiva. Situated in a narrow gorge at the farther end of Lidder valley, Shri Amarnath ji stands at 3,888 m and is 45 km from Pahalgam and 141 km from Srinagar. There are two different routes that pilgrimage can choose from when planning Amarnath Yatra 2012. The more difficult and longer route is through Pahalgam (mountainous) which has steep gradients, that make climbing to much of a challenge and the other route is through Sonmarg. Surprisingly, in spite of the challenges seen on Pahalgam route to Amaranth caves, many elderly pilgrims don't mind scrambling the rocky path and reach the final destination. While some 'Yatris 'walk others ride ponies or palanquins to reach the cave.

Like every year Amarnath Yatra 2012 is organized in the month of July and will end on Purnima on Raksha Bandhan The Importance of Amarnath yatra is mentioned in the ancient Vedic texts -Ved and Purans. Here's an interesting story that will add greater meaning to your Amarnath Yatra 2012. Legend has it that this is the Cave which was chosen by Bhole Shankar for narrating the secrets of immortality and creation of Universe to Maa Parvati . Lord Shiva decided on Amarnath Cave to disclose the secret of Immortality. On his way to Amarnath Cave he kept renouncing everything near and dear. He left Nandi (The Bull which He used to ride) at Pahalgam (Bail gaon). At Chandanwari He released Moon, at the banks of Lake Sheshnag He removed the snakes. His son Ganesha was left at Mahagunas Parvat (Mahaganesh Hill). At Panjtarni, Shivji left the Five Elements behind (Earth, Water, Air, Fire and Sky) symbolic of sacrificing the world.

Reaching Amarnath Cave, Lord Shiva sat in his Samadhi on the deerskin. To ensure that the secret of Immortality was not heard by those living, Lord Shiva created Rudra named Kalagni and commanded that he destroy every living thing in and around Amarnath Cave .But as a matter of chance an egg which was lying beneath the deer skin remained untouched. Later pair of pigeons was born out of this egg and they became immortal after hearing the Amar Katha. Even today, many pilgrims report seeing the pair of pigeons when they trek the arduous route to pay their obeisance before the phallic symbol of Shiva -the Ice-Lingam.

Years later when Bhrigu Rishi came that way on a visit to The Himalayas, he was the first one to have seen the Holy Cave. When people heard of the Lingam, Amarnath for them became Shiva's abode and a Centre of pilgrimage. Over years devotees of Lord Shiva, have kept the faith going as is evident from the innumerable applications that are made every year. A similar rush of devotees being expected this year again for Amarnath Yatra 2012.

There are many important rituals that the Amarnath Yatra 2012 yatris will be apart of, prior to reaching the main destination. The sound of bam bam bholey , the echo of conch shell and the chant of collective prayers are all an expression of the devotees heart felt devotion. Along with common people many Sadhus undertake the pilgrimage, people of faith irrespective of their ethnic and cultural diversities come together to make the Amarnath Yatra a memorable experience. Extensive arrangements are being done by authorities for Amarnath Yatra 2012 too, though one cannot totally ignore the support and help given by the locals of Jammu - Kashmir. Considering the increased number of deaths during Amarnath Yatra over the last three years , the rules for Amarnath Yatra 2012 , have been made more stringent despite which the faith continues to grow each year .

Here are some useful tips to remember while undertaking Amarnath Yatra 2012:

Arrangements for doctors and nursing staff are made enroute to cater to the needs of the pilgrims, free of cost. However, pilgrims should carry medicines specifically prescribed for them.
Pilgrims are advised to carry with them biscuits, tinned food etc. to cater to their immediate needs. Firewood or gas can be obtained at Chandanwari, Sheshnag , Panchtarni and near the Cave.

Food and tent accommodation are available during the Yatra period. These are provided on the basis of payment of rates fixed by the authorities .

As per rules no Yatri is allowed to proceed on the journey without a Registration Card.

Wish all pilgrims a safe pilgrimage , and may Lord Shiva bless you with peace , prosperity and happiness .