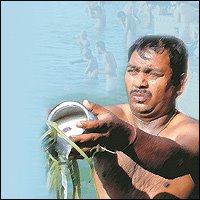 In 2013, Shradha Paksha is starting from 19th September. In that context only, we are trying to divert your mind toward your Pitras. There are following two reasons for this:

Generally, Pitri Paksha or Shraddha Paksha is the period of Krishna Paksha in the Hindu month of Ashwin. In Maharashtra and Gujarat, Krishna Paksha of Bhadrapada month is known as Pitri Paksha. However, Shraddha is also performed by targeting some Tithis (Hindu Lunar Days) as well as constellations throughout the year, but still the main significance is given to the Pitru Paksha or Shradhpaksha. The category under which a Shradh should be performed is quite important. As per Manu-Smriti, the dead parents, grandparents and great great grandparents are divided into three categories while shraddh, that are:

Ritual of Shraddha is a grand way of paying tribute after the death of our ancestors, the affectionate parents and grandparents who have stayed with us throughout their lives. Shraddha in actual sense means "act of worship such as Pind-daan and Tarpan etc. performed with faith". Chaturvarga Chintamani says that the person who performs Shraddha satisfies not only his dead relatives but also Brahma and all other living organisms. Same has been mentioned in Satsangi-jeewan (5-12-107) that the man who doesn't believe in Shraddha get cursed by Pitras and dead ancestors drink his blood. However, Satsangi-jeewan (5-20-72) says that the Sharddha performer becomes healthy, calm, ageless, blessed with sons, cherishes the prosperity and money.

Proof of Pitru Paksha by Astrology

Some people argue that if the ancestors are dead and cannot receive Shraddha then why do we perform it? It is important to know that during pitri paksha we cannot see the pitras in real, but actually they are present among their progenies. Astrology and planet transit have also proved it. Generally, during Pitri paksha, Sun comes in Virgo sign. Virgo is the sign of Mercury and Mercury is exalted in this sign. It is also the Mool Trikona (most liked) sign of Mercury. Sun is the significator of father and is king planet, whereas Mercury is considered as Prince. Therefore, at this time, Sun, the significator of Father and king planet resides in the sign of Prince. Naturally, it signifies the visit of fathers and forefathers at the house of son or progeny. The entire period of pitri-paksha is important for Pitru Shraddha, but Amavasya (new moon day) is considered as the special day. If the transit of planets is seen on Amavasya (new moon day) then its effect starts reflecting and can be felt easily. Like it is said before that during the period of Pitru Paksha, significator of father, Sun, resides in Virgo sign. Moon also comes in that sign on the new moon day, which means that the significator of both mother and father comes in the house of prince or son. This indicates that our ancestors, either female or male, they both visit the house of their progeny. Therefore, it is the duty of progenies to perform Pitru Shraddha.

In the world of Astrology, the discussion of Pitru Dosha is quite general. Pitru Shradha helps in coming over this dosha also. However, according to some astrologers, the bad deeds of a person hurt his forefathers due to which they suffer from Pitru Dosha and its evil effects. However, the truth is just opposite to this because the birth chart (kundali) of a person is developed at the time of his birth only and at that time it is not possible to do any deed for any person. Therefore, Pitri Dosha due to the native's bad deed is simply absurd and a myth. The truth is that Pitru Dosha is the result of the sins or bad deeds done by our forefathers. Like it is said before, progenies bear the results of their forefathers' bad deeds in the same way they bring their legacy. Therefore, presence of Pitru Dosha in Kundali (birth chart) signifies that the native's ancestors have not attained Moksha (freedom from cycle of birth and death) and peace. In such cases, Pitrishraddh comes out as an optimum solution.

Ancestors are considered from the ninth house of the birth chart. Sun, the king of planets is considered as the significator of father as well as ancestors. Therefore, when sin affects the ninth house, lord of the ninth house and Sun, Pitri Dosha is considered to take place at that time. The case is related to the planet Sun that is why only Saturn, Rahu and Ketu are considered as the planets of sin. Therefore, Pitru Dosha forms because of the effects of the planets Saturn, Rahu and Ketu over Sun, ninth house and ninth lord. And, if we go in depth then the native suffers from Pitri Dosha when Sun-Rahu or Sun-Saturn makes conjunction in one of these houses- First, Second, Fourth, Fifth, Seventh, Ninth and tenth house. The house that forms this conjunction give its bad results. Probably, the main reason behind this could be that the planet Sun is the significator of destiny, health, bone, eye, finance, empire/government and leadership. The happiness that was discussed before decreases due to the weak Sun. Therefore, if somebody's chart has above mentioned planetary positions, one should perform the Pitru Shraddha in that particular Pitri Paksha Tithi. Additionally, one should worship the Banyan tree as well as Lord Vishnu. One should pray them to forgive their own and their ancestor's intentional or unintentional sins.

Therefore, the prayers from God should be done to release the ancestor's souls to peace to remove the Pitru Dosha.