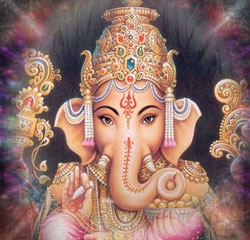 Auspicious occasion of Anant Chaturdashi is dedicated to the grand celebration of Ganesh Visarjan or end of Ganesh-utsav in Western regions of India. However, people in North India observe vow and worship Anant (Lord Vishnu). It is believed that worshiping Anant till 14 years makes the devotee abundantly wealthy.

In Western regions of India 'Ganesh Visarjan' is celebrated. However, in some northern parts of India the auspicious occasion of 'Anant Chaturdashi is dedicated to Anant (Lord Vishnu). During this occasion, devotees observe a vow for the period of 14 years. It is strongly believed that worshiping Lord Vishnu and observing vow during the sacred occasion of Anant Chaturdashi certainly makes the person abundantly wealthy.

According to Hindu beliefs, there was a Brahmin named Sumant used to live with his wife Diksha and daughter Sushila. When Diksha was no more, the Brahmin Sumant married another lady named Karkash. She was the step-mother of Shushila and used to harass her a lot. Later, Shushila married to Kaundinya. One day Shushila visited the bank of a river and found a group of ladies observing vows and were worshiping deity Anant. She curiously asked group of ladies about the reason of the custom and rituals. Group of women sitting there told Shushila about reason of observing vows. For observing vow a string is tied on wrist of left hand of ladies and right hand of men. After hearing that fruitful religious tradition, Shushila also started worshipping 'Anant', and observed vow. Gradually, Kaundinya and Shushila became rich. But one day, Kaundinya noticed string in left wrist of Shushila and asked the reason. When Shushila told him behind binding this string he did not believe and took out that string from Shushila's hand. And suddenly he got curse of Lord Vishnu. He became poor and used to survive pathetic condition. Repenting on his Karma, Kaundinya realized that he committed mistake, and went to forest in search of Anant. He asked trees, lakes, mountain, and to all natural surroundings about Lord Anant, but no one gave him positive response. Finally, disappointed Kaundaniya was ready to sacrifice his life, but suddenly Lord Anant appeared in a form of Brahmin in front of him and guided him to observe vow till 14 years for Anant. Following guidance of that Brahmin, Kaundaniya made 14 years of vow and delighted lord Anant. This way he obtained his happiness and wealth which he had lost.

Apparently, Anant Chaturdarshi is really an auspicious occasion dedicated for both Lord Ganesha and Lord Vishnu. Immersion of Ganesh idol is performed on this auspicious day and sacred fast, worship of lord Vishnu and observing vow is also done on this sacred occasion.