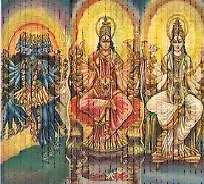 Ashada Navratri, which is also called Gupt Navratri or Gayatri Navratri is a festival of nine days. This year Gupt Navratri will start on July 5, 2016 and will go on till July 13. Gupt Navratri is dedicated to nine forms of Shakti and falls in the month of Ashada. This festival is chiefly celebrated in North India as well as South India. Its name differs from region to region. In Himachal Pradesh, it is known as Guhya Navratri. Varahi Navratri is the name for it in South India, where Goddess Varahi is worshiped. Goddess Varahi is known to be as one of the Mantrika of Devi Mahatmya out of seven.

The literal meaning of the word "Gupta" is "the hidden". Gupt Navratri is of nine days and these days are meant to worship the nine forms of Shakti. People have a belief that Kings of Gupta dynasty used to celebrate this Navratri. Since then, Navratri has become very popular.

The customs and rituals which are observed in this Navratri are the same which are observed during other Navratras. In this Navratri, first three days are celebrated for the appearance of Durga in form of Kumari, Parvati and Kali. One ritual during this Navratri is to plant the seeds in the bed of mud on the very first day. Shoots grow up until the ninth day comes when these are flown into the water. Next six days are reserved for other forms of Durga namely, Lakshmi , Saraswati , and Lalita. The ninth day is known as "Mahanavami". These are some of the mandatory practices performed during Gupt Navratri.

There is a step by step process to follow during Gupt Navratri. First of all, you should take a bath and wear yellow clothes in the evening time. Sit on a Kush Asan or wool Asan, facing north direction.

Keep a plate on the Puja Sthan and draw a ‘Swastika’ or ‘OM’ on it with saffron. Place Mahalaxmi Yantra on it.

After this, you should put a conch on it. Now, put some rice (colored with saffron) into the conch. Light a Diya after that.

Gupt Navratri is very fruitful, as it helps in overcoming many issues and troubles of life. Let’s take a look on the importance of Gupt Navratri:

Gupt Navratri is one of the important religious festival of Hindus. It is celebrated to please Goddess Shakti and overcome tensions of life. Celebrate Gupt Navratri in 2016 and stay at bay from every sorrow and problem.