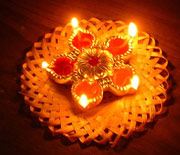 When will Diwali be celebrated in 2013? It is a question perplexing the minds of many amongst us who wait for the occasion patiently. Coming down as a part of tradition , Diwali is indeed one of the most important festival in India. The word "Diwali" means "Row of Lights". Hence Diwali Festival is also called the "Festival of Lights". This festival is symbolic of the victory of good over evil and is said to bring in joy, happiness and prosperity.

Diwali is celebrated not just in India .Deepavali and Diwali celebrations takes place in many countries all across the world. There is a large population of over 30 million Indians living outside India in overseas countries due to migration or as guest workers and students.The love for the festival is growing with time. Those 'Non-Resident Indians' (NRI) and 'Persons of Indian Origin' (PIO) play an important role in many societies and enrich the cultural diversity of whole world, sharing the message that Diwali brings with it-that is celebration of the victory of good over evil.

Diwali in 2013 will be celebrated 3 November. Diwali is a five day long festival that marks the victory of good over evil. It will begin on 1st and will remain till 5th November.

Diwali has a major religious significance for Hindus, Sikhs and Jains alike - not only in India, but also all across the world. As per western calendar dates, Diwali falls somewhere between October or November every year - which is just after the monsoon season, is over in India. However, the exact date differs from year to year. Going by Hindu astrology Diwali falls on Ashvina Amavasya on 15 Ashvin (Hindu month). This date also signifies beginning of the Hindu New Year, and many businesses in India starting a new accounting year on the Diwali holiday.

Contrary to popular perception Diwali is a festival over 5 days.

Why is Diwali celebrated on Amavasya

There is strong astrological significance attached to Diwali. It is celebrated on the day when Sun is debilitated (neecha). If a planet is neecha, that means it loses majority of its strength. Moon is also weak. Diwali is celebrated on Amavasya when Moon is very close to Sun and doesn't have paksha bala. Moon is extremely weak about paksha bala.Though not many people understand the astrological importance of Amavasya for Diwali celebration , there is much to support it. Briefly, Sun is the planet of light; Moon is the planet of wealth. On the day of Diwali, these two planets are weak and dark forces are very powerful. As these planets are weak and dark forces are powerful and in order to provide strength to both sun and moon we worship, and light candles/ Deepak and worship Laxmi to provide strength to Moon. This nullifies effects of dark forces.