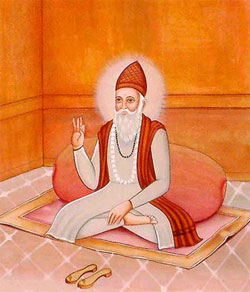 The relationship between a teacher and a student extends beyond a classroom. So who is a teacher or what we call 'guru' in Hindi and Sanskrit? Indeed anybody who gives direction to our lives can be called a Guru. This unique festival called 'Guru Purnima' reflects the rich cultural heritage of India to honour the 'Guru' who in a way is the torchbearer of our lives. Our parents give us life a 'guru' is someone who teaches us the way of living. Read on to know everything significant about Guru Purnima .

A great teacher fills one's life with hope and showers a thousand reasons to welcome all aspects of life with courage. Guru Purnima 2017 date is, 9th July, Sunday. A day to pay homage to our 'Gurus', without whom this journey called life would be without direction. This festival is of paramount importance to Hindus and Buddhist who for years have kept alive the tradition of worshipping the spiritual Guru.

Guru Purnima falls in the month of Ashadha ( June - July ) on the full moon day as per the Hindu Calendar. On this auspicious day the followers of Buddhism pay tribute to Lord Buddha, as it was on this day that one of the greatest spiritual leaders of all time - Lord Buddha delivered his first sermon in Sarnath. For Hindus, Guru Purnima marks the birth anniversary of the greatest guru of ancient India - sage Vyasa. Rooted in tradition and celebrated by Hindus for years now - Guru Purnima in today's time is an expression of gratitude towards a teacher by his/her disciple. Like every year, Guru Purnima 2017 will also be celebrated all over the world to honour those who teach us the greatest lessons of life 'the art of living well'.

Guru Purnima is celebrated by different names in different parts of the world. Other popular names are Maharishi Vyasa Jayanti, Vyas Purnima. Likewise, there are many legends associated to how this festival originated. Talking about the Hindu belief, this day marks the birth of Maharishi Vyasa the author of Mahabharata , the great spiritual leader who divided the Vedas into four parts and showed people the way from darkness to light. The popular legend among Buddhist is that it was on this day that Buddha gave his first sermon, called the Dhammacakkappavattana Sutta to five monks at Sarnath laying the basis of the teachings of Buddhism. For Jains, Guru Purnima marks the beginning of Chaturmas( rainy season), a day on which the Jain Guru Mahavira made his first disciple to carry forward his teachings. Though the legends behind Guru Purnima are many yet the overall message is one - to honour those who shape our lives and guide you through leading by example.

So what kind of rituals will people indulge in celebrating Guru Purnima? Religious discussions will be held in many parts of world. It will be a day to retrospect and see if as a disciple you have followed the path shown by your guru, in mind speech and action. With an attitude of gratitude disciples offer sweets, flowers and guru dakshina to their Guru and seek blessings. However the true 'Guru Dakshina' is living by the righteous path showed by your 'Guru' and spreading his teachings. So on the occasion of Guru Purnima, you will see spiritual wanderers hold spiritual discussions.

So just in case Guru Purnima, is the first time ever you're celebrating this festival here are few things to do. Abstain from grains and live on milk and fruits, spend time meditating and recite your 'guru mantra'. Recall the path shown by your preceptor and strengthen your resolve to follow the same. Awaken your spiritual conscience and promise to live a righteous life.

It's not without reason that our ancestors kept the spirit of Guru Tattva burning in the form of Guru Purnima. For ages after ages people in India have considered Guru the next after God. This Guru Purnima, align your life to the righteous path showed by your Guru as that is the only way to free oneself from the bondage of sorrow and death and experience greater conscience.