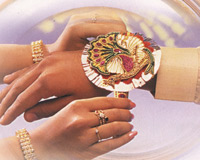 Raksha Bandhan is meant to be the festival love, care and protection which is promised by a brother to his sister. This day is celebrated on the Purnima of Hindu month Shravana. It is also named as Rakhi, Rakhri or Rakhi Purnima, which differs according to the region. The date for Raksha Bandhan 2017 is 7th August. On this day, sister ties rakhi on the wrist of her brother. To know more about this festival, read on to this exclusive article only on AstroSage...

Raksha Bandhan brings a great chance of making nearness of brothers and sisters. Raksha Bandhan is a sacred bond of love and protection that a sister wishes and ties on wrist of her brother in a form of 'Sacred Thread' called Rakhi. In India, this day is not just a festival day but a pious occasion that shows incredible love and care of a sister inclined towards her brother. A brother too respects his sister and gives promises on the day of Raksha Bandhan that he will always admire lovely emotions of his sister. Raksha Bandhan is also famous with other names like Rakhi or Rakhi Purnima. In Raksha Bandhan, first rakshi is offered to Lord Ganesha and then tied on wrist of brothers. Also In this year Raksha Bandhan, sisters will have hundreds of choices for buying Rakhis which are available in thousand of designs, colours, and qualities. In Raksha Bandhan, millions of spellbind Rakhis will be purchased by sisters.

Celebrate this Raksha Bandhan with whole of your heart!

Like every year, sisters are vivaciously waiting for Raksha Bandhan of this year. Most sisters, in fact, have already purchased mesmerizing Rakhis (Sacred thread). Rakhis are sacred threads which are available in thousands of designs, colours and qualities in market. Religious Hindu people prefer Rakhi of silk thread of yellow and red colour. Rakhi embedded with Rudraksha is also considered auspicious. Along with Rakhi, the other blessed offerings like sweets and kumkum are also purchased. In this Raksha Bandhan, all sisters are once again going to show majestic celebration of this great festival.

"Raksha Bandhan" amalgamates two Hindi words. 'Raksha' means 'protection' and 'Bandhan' means 'bond'. So apparently, Raksha Bandhan is the bond of protection that a sister ties on wrist of her brother in a form of a sacred thread. At the same time, sisters also wait for surprises and gifts from their brothers.

On the Raksha Bandhan day, sisters and brothers get up early in the morning. After bathing, sisters decorate Rakhi Thali or Pooja thali with diya, kumkum, roli, chawal, rakhi and sweets. They worship and offer first Rakhi to Lord Ganesha and pray for well-being, long-life, and happiness for their brothers. After prayers, sisters take aarti of their brothers, tie Rakhi on their wrist and feed sweets to them. In return, brothers offer gifts to their sisters. In Hindu culture, sister also ties Rakhi in wrist of her brother's wife, if her brother is married.

It is believed that there are so many beliefs or historical memories are attached to wonderful day of Raksha Bandhan. You might be wondering why Raksha Bandhan is celebrated or who began celebration of this sacred occasion. Well, no one knows the actual origin of this sacred festival, but there are some conceptions or beliefs of people that help us to know the reason of celebrating this festival. According to one belief, Lord Yama (Lord of Death) and Yamuna (the river in northern India) were brother and sister. When Yamuna tied a sacred thread on his brother's wrist for immorality and well-being of her brother, Lord Yama cheerily announced that this day (shravana Purnima) will be admired as Raksha Bandhan and will be dedicated to bind love and emotions of brother and sister.

According to another belief, during the war between Lord Indra and Demons, Queen Indrani (wife of Lord Indra) tied a sacred thread on the day of Shravana purnima for protection of his husband.

Rakhi is not only a thread but it is a bond that strengthens the love between a brother and a sister. No matter how far a sister is from her brother, she never forgets to celebrate this festival. Rakhi can also be sent through post to make sure that the rituals of the festival Raksha Bandhan are being performed. Express your love to your siblings and have a great Raksha Bandhan...!!