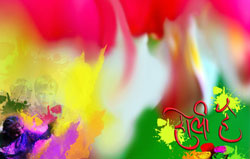 In 2017, Holi will be celebrated on 13th of March. It is popularly known as festival of colors. It is celebrated in every part of India in an enthusiastic way. Every region has their own customs and beliefs for the celebration of Holi. In the Hindi month of Phalguna, it is observed on a full moon day. In Barsana, it is celebrated for 16 days. To learn more, read on the article..

India is a land that has a unique culture and celebrates different occasions with deep rooted social significance. However Holi is one such occasion that goes way beyond and has mythological, religious and cultural significance as well. On the occasion of Holi, we decided to take you through a brief about what Holi means to Indians all across the world.

Celebrate Holi, knowing a little more about the different stories attached to it, one of them being that of Prahlada and Hiranyakashipu. Legend says that once there lived a demon king called Hiranyakashipu who considered himself god and wanted everybody to worship him. However his son Prahlada was a great devotee of Lord Vishnu. Hiranyakashipu thought of getting rid of Prahlada and managed to convince his sister Holika (blessed with the power of staying unaffected by fire) to sit in blazing fire with Prahlada in her lap. While Prahlada remained untouched, Holika burnt to ashes paying for her sin. From here stems the tradition of burning Holika known as Holika Dahan. Let this legend about the victory of good over evil inspire you again for Holi festival and bring an end to all things sinful and usher in what is righteous.

Holi holiday is also an occasion that will be celebrated to recall the legend of Radha and Krishna and their adventure with colours, Legend talks about how Krishna loved to play prank on the gopis took great delight in applying holi colours on Radha and other gopis. It was this prank of Krishna that later became an integral part of the celebrations of Holi year after year. We wish your Holi be filled with a variety of colours red, green blue and you will enjoy this occasion like never before.

On Holi, we see the cool breeze in the morning, a palette of colours in the garden, the chirp of birds singing a sweet melody. Vasant ritu sees nature at its best and the festival of Holi celebrates the beauty of nature after the winter chill. Like every year Holi 2017,will be celebrated in the month of March. Besides being a spring festival Holi is a harvest festival that marks the harvesting of winter crop (Rabi) when wheat corns get ripened and turn golden brown. Farmers pay gratitude to nature by offering their first crop to the Fire God Agni. We wish Holi festival gives farmers a great crop and an occasion to celebrate and express gratitude towards Mother Nature.

This festival has assumed a national flavor over the ages giving it a secular image. Irrespective of their race, culture and ethnic background people enjoy the spirit of Holi all across India. It's a time when throughout India the mood is that of frenzy, that of celebration. The pulse of Indians all across, is recharged with energy filled with passionate pulse of life and vitality. We hope will see Indians all across the globe celebrate the occasion and spread the message of warmth and love , like every year that passed by.

Holi - In Different Parts of India

In places like Mathura and Vrindavan you will have the modern form of Holi. The Bakai-Bihari Temple at Vrindavan is a place to be at during Holi. You will see people drenched in colours of devotion towards Krishna. .Whereas in Uttar Pradesh, major temples of the region dedicated to Krishna and Radha will celebrate Holi in a different way. Here Holi means getting drenched in colored water which is like a blessing from god and is considered auspicious.Colored powder and water sprayed from pichkaris(special squirts) paint people, streets and roads whole day through. Here, traditional song called rasiya is sung adding to the festive spirit of Holi. Haryana, Maharashtra and Gujarat are known to have mock-drama of Krishna trying to break the pots and steal the butter, reliving Krishna 'Baal Leela'. In Bengal, Holi is called Dol Yatra (the Swing Festival) in which dolls of Krishna and Radha are placed on swings and devotees take turns to swing them.

One of the major festivals of India, Holi bonds Indians all across the world. On behalf of our entire team we wish you Happy Holi!! Celebrate this Holi spreading colours of love, companionship, peace and joy in the lives of those around and paint their world in myriad hues.