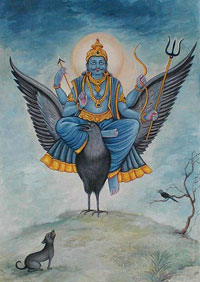 Shani Amavasya is favorable day to delight Lord Shani and to reduce delays, difficulties and all Saturn related troubles. This day is also auspicious for performing shradh pooja for dead forefathers and ancestors. Read details and importance of Shani Amavasya here.

Shani Amavasya in year 2017 is on May 25th. Shani is a Hindi word for the name of Saturn. In Hindu culture, Amavasya Day is not considered auspicious for initiating any good or important work or performing any sacred pooja function. However, this particular 'Shani Amavasya' is the only day that is regarded auspicious for performing any custom, rituals of fair traditions; except the other ones. This sacred day often comes one, two or very few times in a year. In both, Vedic Astrology and Hindu Mythology, planet Saturn is one the very powerful celestial body in Universe. For Hindu people, Saturn is Lord Shani who is depicted with black complexion. In many places of India, it can be noticed that people donate mustard oil to please Lord Shani. The person under influence of Shani Dasha or Saturn period must worship Lord Shani especially during Shani Amavasya. It is acknowledged that worshiping Lord Shani during Saturdays or on the day of Shani Amavasya help natives to reduce evil effects of planet Saturn. Saturn is very powerful and influencing planet. It can be both 'malefic' and 'benefic'. If this planet is benefic then the native will definitely receive abundant prosperity and fortune in life. Many difficult tasks automatically be accomplished by the grace of Lord Shani. But, if this planet is not favorable in one's horoscope, the native will certainly experience delays, difficulties, and types of different problems. Such person should not avoid worshipping Lord Shani on Saturday or especially on the day of Shani Amavasya. Remedies for Saturn can also be applied to reduce malefic effect of this planet.

What is Shani Amavasya?

It has already been mentioned above that 'shani amavasya' is a sacred day that comes when new- moon day is noticed particularly on Saturday. It is the only day that is considered favorable for bringing fortune and prosperity. However, Amavasya of all months are only considered for Shradh pooja or trapan to offer to dead ancestors and forefathers. But, Shani Amavasya is considered very favorable to perform sharadh pooja for forefathers. People who are facing obstacles or many difficulties in life and are not finding proper remedies can follow rituals and customs to delight Lord Shani on the day of Shani Amavasya. Therefore, Shani Amavasya 2017 is an auspicious day for Shradh 2017.

What can be done on Shani Amavasya?

However Shani Amavasya is said to be a propitious day for Hindu devotees, especially to perform 'shradh' or 'trapan' to dead ancestors, this day is also not auspicious to begin other auspicious work like expansion of new venture of business and so on. But it is sure that worshiping Lord Shani on this day certainly bestows the devotee immense blessings of this deity.

Now, you may be wondering what special ritual or custom can be offered to Lord Shani on this particular day. Devotees visit temples or shrines of Deity Shani. It is believed that mustard oil is very dear to Lord Shani, so you can offer Him this pleasing item along with flowers, blessed food and fragrance of dhoop batti.

It is strongly believed that this way, you can easily please Shani Dev and get his immense grace and blessings. Your troubles get disappear, you can become free from evils, and you feel enormous peace and happiness by grace of this deity.

People with influence of Shani Sade Sati, Dhaiya Shani, or Shani dosh are strongly advised to worship Lord Shani on the day of Shani Amavasya. They can visit any Shani temple near to their place and offer mustard oil on this day. It may help them to reduce evil influence of Shani. Devotees can also perform Shani Shanti Yagya on the day of Shani Amavasya to meet fortunate events in life.

On the day of Shani Amavasya, Shani spell can be recited with pure and depth of heart after bath.

In Vedic Astrology, planet Saturn owns zodiac signs, Capricorn (Makar rashi) and Aquarius (Kumbh rashi). Hence, Shani Amavasya can be considered very propitious for people especially with these signs, and they must worship to please their Lord.