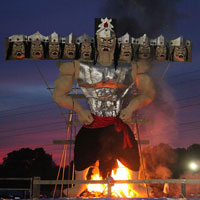 The forces of good and evil keep working around us; one has to learn to make a choice. Indeed, making a conscious choice of good over evil is a habit that needs constant practice. Every year, the celebrations of Dussehra (Vijayadashami) remind us that the light of truth can overshadow the darkest evil.

Dussehra (Vijayadashami, Dasara, or Dashain) 2017 date is September 30. Dussehra is celebrated on the tenth day of Shukla Paksha of Ashwayuja or Ashwin month as per the traditional Hindu calendar. For years, Dussehra has been celebrated to commemorate the victory of good over evil. It is a significant day that carries a beautiful message for mankind that even though other things may change, truth is here to stay.

Dussehra is celebrated in different ways in different part of India. In some parts, Hindus attend special prayer meetings during Dussehra and some organize special food offerings to deities at home or in temples. Burning the effigies of Ravana (a mythical king of Sri Lanka) or burning bonfire (symbolic of Ravana) is a common practice that resonates the message that mankind can progress only if they choose positive and righteous deeds over evil practices. In a way, one can say that Dussehra is a culmination of Navratri festival. The nine days of Navratri are dedicated to Shakti symbolic of energy and the purpose of Navratri fast is open the three knots- rudra granthi, brahma granthi and Vishnu granthi to attain self purification. For those who observe Navratri, Dussehra will mean the ultimate triumph over the evil forces within and without. So, this day is also known as - Vijayadashami.

Like every year, Dussehra in 2017 will also be marked with unique kinds of festivities all over India, which have become popular over years locally. Performances of the Ramlila (a visual version of the epic Ramayana) are very popular in Northern India. Ramlila plays are based on the life of Lord Rama and his journey from birth to 14-years of exile in the forest with his wife Sita. Depicting Sita's abduction by Ravana, the tale ends with Lord Rama and Lakshman killing Ravana. In Mysore and Karnataka, people rejoice joining a festival procession including goddess Chamundeshwari on a throne mounted on elephants. In Karnataka, Dussehra is an occasion to seek the blessings of Shakti on household tools, books, computers and other machinery that one uses in day to day life. In Bengal, Vijayadashami or Dussehra marks the end of festivities of Durga Puja. The four-day Durga Puja festival in West Bengal end with people celebrating Vijayadashami which marks Goddess Durga's return to her husband's home. However, before the immersion of the idols of Maa Durga, women engage in 'sindoor khela' (application of vermilion on each other's forehead) and extend greetings to friends and relatives. Dussehra is celebrated in a special manner in the state of Gujarat. Garba dance functions and the Navratras get over with Vijayadashami. Out of all the fairs organized during Dussehra the most popular is the one organized in Himachal Pradesh. It is known as 'Kullu Dussehra Mela'. Worship of Lord Raghunath, dance, drama and the traditional folk music of the flute and the bugle fill the air and make Dussehra, a memorable experience. The Kulu mela during Dussehra, like every year will be attended by many foreigners. They too will get a chance to experience the vast diversity of Indian tradition and culture.

Dussehra is very auspicious day to start all kind of things important, new and significant. One can go ahead with things like buying new machinery for their home, purchase gold, silver and vehicles. Discarding the old and welcoming the new is auspicious on Vijayadashami. One need not look up the panchang or consult an astrologer because the entire day in itself is auspicious from astrological point of view.

Dussehra is a great time to involve yourself in celebrating the power of good. Indeed, it is true that evil can never win the battle against the good. On Dussehra remove the negative ideas that prevails inside you and be the part of goodness.