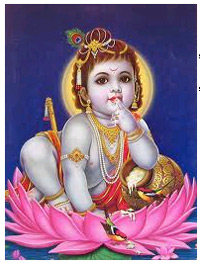 Janmashtami in 2017 will be marked on 14th of August. In India, this festival is celebrated with great enthusiasm and zest. It is celebrated to commemorate the birth of lord Krishna who was the 8th incarnation of Lord vishnu. Every year, it is observed on the 8th day of Krishna Paksha in the Hindu month of Bhadrapada. According to the scriptures, on this day only, Dwapara Yuga was ended and Kalyuga was commenced. To know more, read on this article...

The festival of Janmashtami which is also known as Krishnashtami is a symbol of absolute faith of people in Lord Krishna. The enthusiasm of people can be witnessed in all parts of the country and the zeal with which Janmashtami is celebrated is unmatchable. Two more popular name of Janmashtami are Sri Jayanthi and Gokulashtami.

Janmashtami has an interesting story behind its origin and celebration. There was a King of Mathura named Kansa who was a wicked king. He was also known to be as the uncle of Sri Krishna. He had a sister Devaki whose husband was Vasudeva. There was a prediction that Sri Krishna will born to Devaki and he would kill Kansa, the wicked King. Kansa, on found this, got enraged and killed all the child of Devaki. Then he got Devaki and Vasudeva imprisoned. But the way this prediction was made, there will be the eighth avatar of Lord vishnu who would kill Kansa, So, being an eighth avatar of Lord Vishnu, he was born in the middle of the night.

After this, Vasudeva came out of the jail after finding all the guards in the hypnotic sleep. He, with the help of Sheshnag, who saved the child from the torrential rains managed to save this child from the clutches of the King Kansa. Yashoda, a lady who was living across the river Yamuna, also gave birth to a female child. Vasudeva exchanged the child and placed Sri Krishna there and brought with him the female child. In the meantime, Kansa reached there and wanted to get rid of the child. As he was about to kill the child, the child disappeared into the air by uttering the prediction that the person he wanted to kill was already born. Finally, Sri Krishna kills the wicked king, Kansa.

Krishna Janmashtami is the day, when prayers and bhajans are sung by the people. Holy mantras are chanted out by the people on this very day. People offer their prayers to Sri Krishna. People prepare the sweets at home. Plays are organized in the streets or in the parks and small children like to dress like Sri Krishna.

Janmashtami has a significance of its own. Lord Vishnu in a sacred book of ancient times named Bhagavad Gita says that whenever there wil be any dominance of evil in the society and the decline of the religion, I will reincarnate in this world to kill and remove the evil and also to protect the good. The main significance of this festival lies in encouraging the goodwill and discouraging the bad will. Krishna Janmashtami is also celebrated for the togetherness. This holy festival brings all the people together. Hence Krishnashtami symbolises faith and unity.